A tank full of colorful fish is a beautiful sight! But not all fish like company; some are downright aggressive to visitors and territorial when it comes to their living space. Betta fish and angelfish, in particular, thrive on solitude and may even kill some fish that try to share space – but can they live together?

Betta fish can live with angelfish. That does not mean it is recommended, though. While betta fish and angelfish can sometimes be compatible enough to share a tank peacefully, it is not generally a good idea to house them together. Doing so requires preparation, caution, and a vigilant eye.

The rest of this article will explain a bit about how betta fish and angelfish can live together. We’ll also delve into which factors affect what occurs when they are put in a tank together and what pet owners might do to be proactive in increasing the chances that these fish, both aggressive in nature, might cohabitate peacefully.

How Can Betta Fish and Angelfish Live Together?

It’s nice to think of animals (or in this case, fish) living together in harmony. It can happen and often does. Some fish can naturally cohabitate while some fish cannot. Though many fish can be added to a fish tank together with little to no problems, that is not always the case.

Sometimes, acclimating fish to one another takes a bit more preparation. Such is the case with betta fish and angelfish.

As I mentioned, angelfish and betta fish can live together but probably shouldn’t. Here’s why – they’re aggressive. If you put two bullies in a room, what is going to happen? They’re going to fight! The same is true for fish with aggressive tendencies.

Betta fish often try to fight themselves just by seeing their own reflection in their tank! And don’t even think about putting them in a tank with one another; fish of the same species do not always get along.

Angelfish are similarly aggressive. Part of the cichlid family, they are the least aggressive of their family but should be combined with other fish cautiously.

That doesn’t mean all hope is lost if you have your heart set on owning both fish in a single tank. However, it does mean you need to take a few extra steps and really think about whether it’s worth the effort needed.

Let’s look at some factors that might help or hinder betta fish and angelfish from successfully living together.

The Size of the Tank 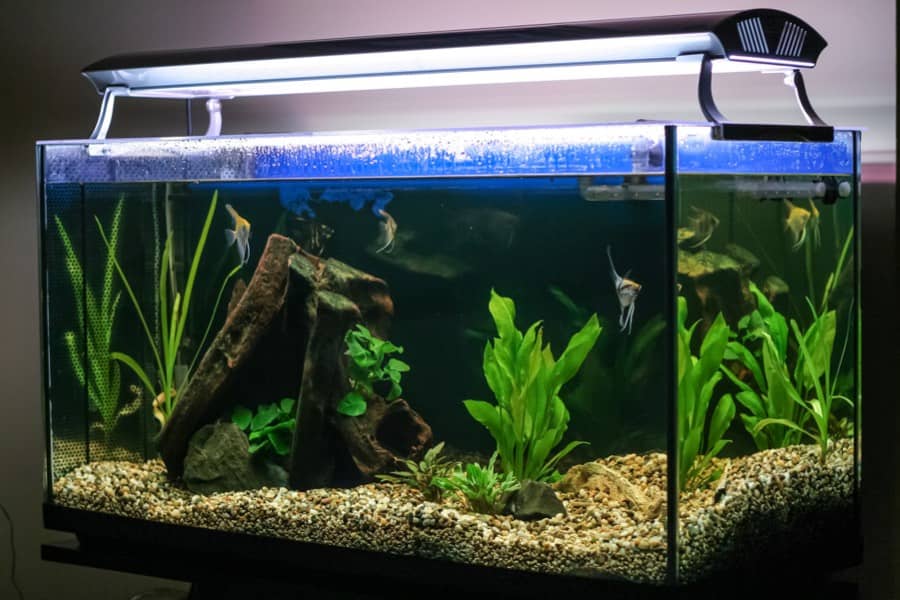 When it comes to housing fish together, the size of the tank matters. Both angelfish and betta fish need approximately the same water temperature (78-84 degrees Fahrenheit is good range for both types of fish). And both are freshwater fish, which makes them compatible in that sense, but here are some tank considerations to keep in mind when deciding to house angelfish and betta fish together:

Even when tank size is considered, it is important to note that both angelfish and betta fish swim in the middle or upper half of the tank, and when other fish come into their territory, fights naturally occur.

To help, be sure to equip your aquarium with many hiding spots. Some of the best choices include tall, leafy plants. Fish in danger can easily dart between leaves or behind structures or into hidden windows to escape aggressive fish and avoid a fight.

If you’re looking for a 20-gallon tank to house a single angelfish or an angelfish and a betta fish, this Tetra Aquarium makes an excellent choice worth exploring.

If you’ve decided to simply stick with a betta fish for your next pet purchase, this MarineLand Portrait Glass LED Aquarium is an impressive option.

The older an angelfish gets, the more likely it is to be aggressive and territorial. Younger fish tend to do better in group environments than their more mature counterparts.

As a rule, buying a young angelfish will give you the best chance of peaceful cohabitation, at least for the short term. The one caveat to be aware of is to be wary if you have a larger male betta, which can often be aggressive and may be more inclined to wound or kill the angelfish.

If combining angelfish and betta fish, your best bet is to buy your fish young. Consider buying a female betta, and be prepared to separate the fish if and when one or both become aggressive. Though they may live peacefully together for a time, age, and other factors mentioned above may prevent a long-term living arrangement. Be prepared to buy another fish tank.

It’s true – the length of a betta fish’s fins can determine whether or not it should be placed in a tank with an angelfish. In short, here are a few guidelines:

The Verdict: Betta Fish and Angelfish Can Live Together, but Probably Shouldn’t

When having any pet, you want to create an environment where your pet can thrive. With the correct setup, betta fish can cohabitate with other fish, as can angelfish. However, pairing these two aggressive breeds in a single tank can quickly signal disaster.

If you must pair betta fish with angelfish, be sure to take the necessary precautions mentioned above to best guarantee a peaceful cohabitation.

If you have a betta fish or an angelfish and want to pair them with another fish, some choices naturally work better for each species. Here are a few:

Tip: Avoid combining betta fish with other betta fish or with goldfish – both are voracious eaters!

Here’s a video showing some fish that live peacefully with betta fish:

Here are some tips for beginners to help care for your betta fish:

From a logical standpoint, angelfish and betta fish can live together with a few considerations:

There are exceptions to every rule, and with angelfish and betta fish, the rule isn’t stagnant; it’s really a case by case situation, and as a fish owner, you’ll need to do your due diligence to make sure you choose and keep your fish safe and in a healthy environment where they can best thrive.