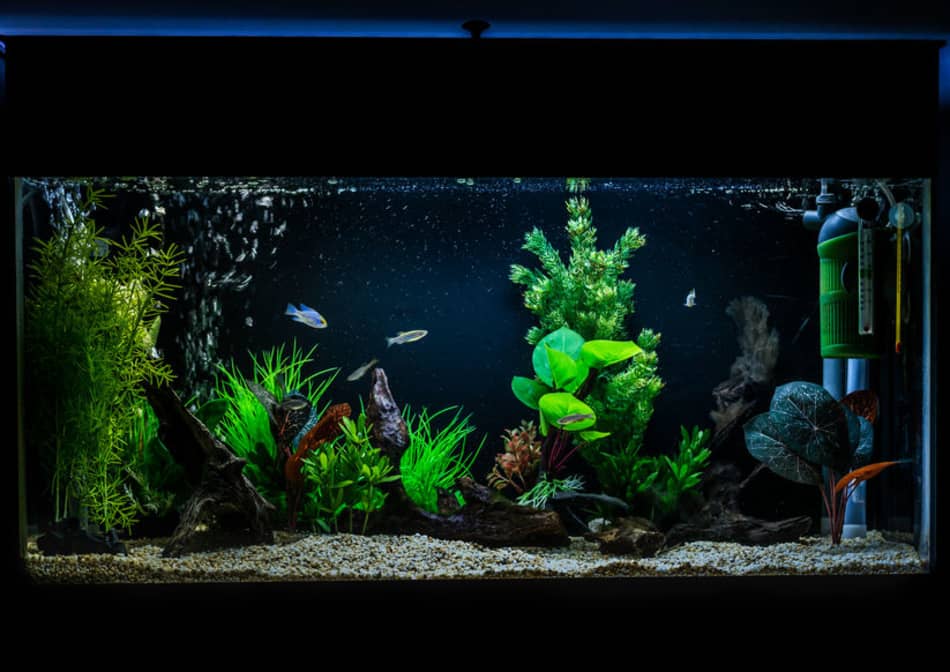 When you hear about bacteria in a fish tank, is it bad news? Bacteria has gotten a bad rap, as most are harmless, neither good nor bad; however, harmful bacteria can kill your fish, which is why adding beneficial bacteria is essential. But is it possible to overdo it and add too much good bacteria to a fish tank?

You can’t add too much good bacteria to a fish tank. The beneficial bacteria will feed on the amount of ammonia available for it. If there are more bacteria than food, the extra bacteria will die or become dormant. A more common problem is not having enough nitrifying bacteria.

To understand why it is nearly impossible to add too much good bacteria, understanding the different types of beneficial bacteria is essential. You should also know why ammonia is deadly and how to add and maintain the necessary bacteria for a healthy ecosystem in your tank.

What Are Beneficial Bacteria?

These single-celled organisms are so plentiful that it is estimated a gram of soil can host 40 million bacteria cells.

Bacteria can be grouped in different ways:

Why Are Beneficial Bacteria Important?

Understanding how bacteria feed helps in understanding the relationship between bacteria and conditions in your tank. Photoautotrophic bacteria get their energy through photosynthesis. Although some create oxygen, they do not produce it in high enough quantities to make much of a difference in a fish tank.

Aquarists pay more attention to two other bacteria types: heterotrophic and autotrophic. Since each plays an important role, both are needed in a healthy tank. Problems occur when there is an incorrect balance between the two.

Heterotrophic bacteria consume organic material—dead plant matter, fish waste, and uneaten food. The organic material they eat is mineralized into compounds such as ammonia. The slimy gunk that grows on tank walls and ornaments is probably filled with heterotrophs. Also, the bacteria you see in bacterial blooms are typically heterotrophs.

Heterotrophic bacteria generally do not hurt fish directly, but they can cause a serious problem when left unchecked. First, they turn aerobic and suck up the oxygen in the water. This causes fish to head to the water’s surface in search of air.

Second, as they digest the organic carbon, heterotrophic bacteria release ammonia, and ammonia, as we all know, is deadly in a tank. So, how are bacteria involved in eliminating ammonia from tank water?

Heterotrophs are larger than most autotrophs and reproduce more quickly. While it might take an autotroph 24 hours to reproduce, a heterotroph can do so in 20 minutes. This is one reason it takes ten to fourteen days to cycle a tank.

Autotrophic Bacteria Can Create Their Own Food

Instead of needing organic material to feed on, many autotrophic bacteria use chemicals for their food. Depending on where they live, these organisms will feed on iron, sulfur, hydrogen sulfide, and so on. In a tank’s ecosystem, autotrophs feed on ammonia.

These bacteria are sometimes called nitrifying bacteria. That name refers to what happens to the ammonia after the bacteria eat it.

Nitrifying bacteria play an essential role in keeping the ecosystem healthy for fish.

Why Ammonia Is So Deadly?

If we catch the flu, it can be deadly, but it can cause us to be sick for a time and then recover. Other things, such as rat poison, will most likely be deadly unless we get immediate help. Rat poison, therefore, is directly toxic.

Ammonia is directly toxic to fish, but what does ammonia do to a fish?

The poisoned fish eventually dies from the lack of oxygen and organ failure.

The signs of ammonia poisoning are related to what the ammonia is doing to the fish.

If you have an aquarium with coral or invertebrates, ammonia will affect them as well.

How Much Ammonia Is Too Much?

Instead of waiting for fish to show signs of ammonia poisoning, you can use a test kit to check the water for ammonia levels. In a perfect world, there would be no ammonia in the water, but levels above 0.06 need immediate attention.

With most test kits, each parameter, such as pH, chlorine, and ammonia, is tested separately, so you can purchase strips that test only ammonia, such as Tetra EasyStrips Ammonia Test Strips. You could also get a kit, such as the Alert Series Ammonia Alert. It continuously monitors ammonia, using a sensor that changes colors to signal how much ammonia is in the water.

Fixing water problems with bacteria is only part of the solution, but let’s examine the bacteria solutions first.

Several species of nitrifying bacteria are required to break down ammonia. The first is Nitrosomonas, which converts ammonia into nitrite. Nitrosomonas are an essential part of the nitrogen cycle and are often used in wastewater treatment. Since nitrite is still moderately poisonous, another species is required.

That species is Nitrobacter. These bacteria convert nitrites into nitrates. Scientists are not yet clear why two separate bacteria species are required to convert ammonia into nitrates. 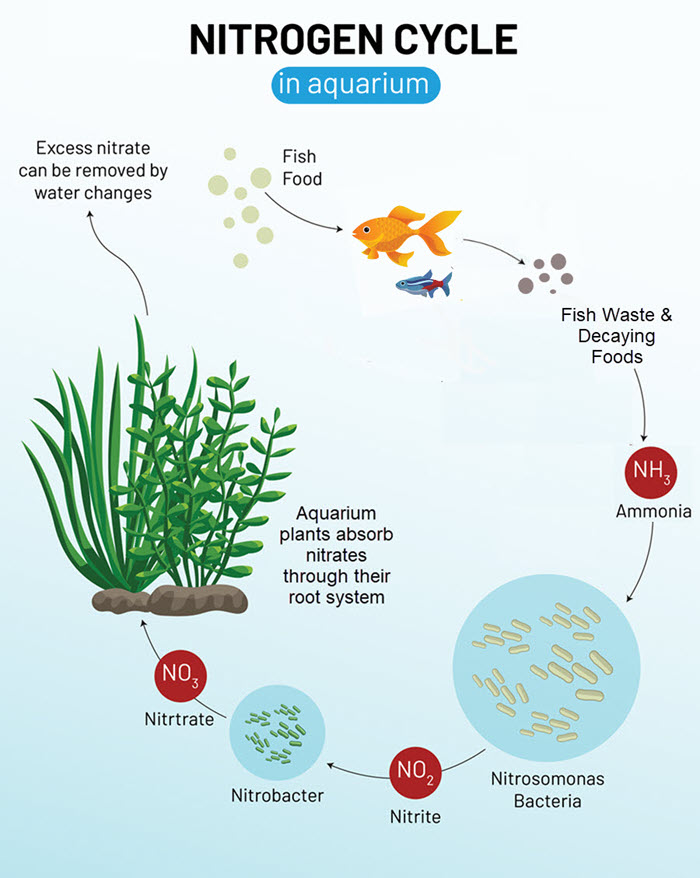 To sum up, the nitrogen cycle works like this:

In nature, this process is an endless cycle that requires little intervention from humans. However, a fish tank is a closed system, and you need to create a system where beneficial bacteria can thrive.

Instead, healthy bacteria live on surfaces in the water—gravel, plants, filter, sponges, and so forth. So, while adding water from a healthy tank will provide your tank with cleaner water, it isn’t going to give the tank better bacteria.

If you are a newbie, the water column refers to all the water in a body of water from the surface to the floor. Even though it is called a column, picture layers, not columns. A fish that likes to swim on the bottom of the tank swims in the bottom column.

There are, however, ways to seed your water using inoculates or mediums that already contain good bacteria.

Getting ammonia-eating bacteria in your tank can be done in numerous ways. Here are some excellent sources of beneficial bacteria:

Filter Media From an Established Tank

Although some people say that used filters harbor diseases and contaminate new tanks, this is not usually the case. The pathogens you are likely to bring into the tank are ubiquitous, meaning they are in most tanks and on most fish.

An exception is filters from a tank with an outbreak of ich.

Soil houses the nitrifying bacteria that is required in a tank. You have two sources of soil:

Avoid using commercial soil mixes as they contain little if any beneficial bacteria, perhaps because of the sterilization process they go through.

Compost will make an excellent inoculate. If you make your own compost, only use some if it has a similar consistency to the composted cow manure found at lawn and gardening stores. Add a tablespoon or two to the water.

Although the inoculates mentioned above make excellent inoculates, if you are tempted to buy some bottled bacteria, here are a few things to keep in mind:

How to Build Up Good Bacteria in a Fish Tank?

After introducing an inoculate into your tank, you can use several hacks to speed up the nitrogen cycle:

If you are doing the things that you should do to keep your fish healthy and are worried that not enough ammonia is being converted to nitrates, there would be nothing wrong with adding some bacteria. As we said earlier, excess nitrifying bacteria will either go dormant or die if there’s not enough food for them.

However, keeping a tank healthy is tricky, and sometimes we do not get everything right. Take cleaning gravel. Not cleaning it often enough leads to excess waste but cleaning it too much can remove the helpful bacteria.

Other water conditions can also affect how well beneficial bacteria function. Low pH levels make it difficult for them to work correctly.

So, along with other maintenance, especially water changes, supplementing your tank with additional nitrifying bacteria can be helpful.

The Importance of Testing Your Water

Even if you are switching out your water according to schedule, keeping your tank clean, and making sure you don’t feed your fish too much, excess ammonia might not be stressing your fish.

It’s important to test your water for more than just ammonia and nitrates. Testing strips such as API Test Strips are readily available.

How to Prevent Problems With Your Tank? 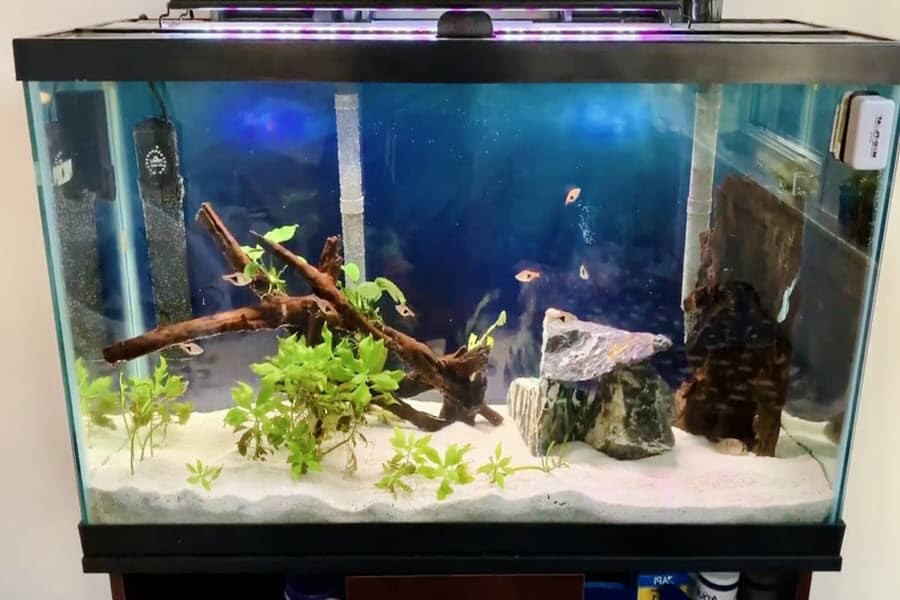 The best way to prevent problems with your tank is to use proper prevention techniques. This starts with setting up a tank so that ammonia can be turned into nitrates and then removing those nitrates with plants and regular water changes. You can also prevent some problems with losing beneficial bacteria by giving them plenty of surface area to live.

Those surface areas include gravel, plants, rocks, and filters. The type of gravel and rocks you use depends on the type of tank you have, but keep in mind that some rocks and gravel can change the tank’s water’s chemical nature. For example, if a rock releases calcium, the calcium will raise the water’s pH level.

The deal way to keep beneficial bacteria in your tank is to provide them good living space. Since bacteria live on surface areas, the more surface you give them, the more living space the good bacteria have.

It’s almost impossible to add too much good bacteria into a fish tank. Problems in a fish tank are usually caused by not having enough nitrifying bacteria to convert ammonia into nitrates or failing to switch out water to get rid of the less dangerous nitrates that your plants can’t eliminate.