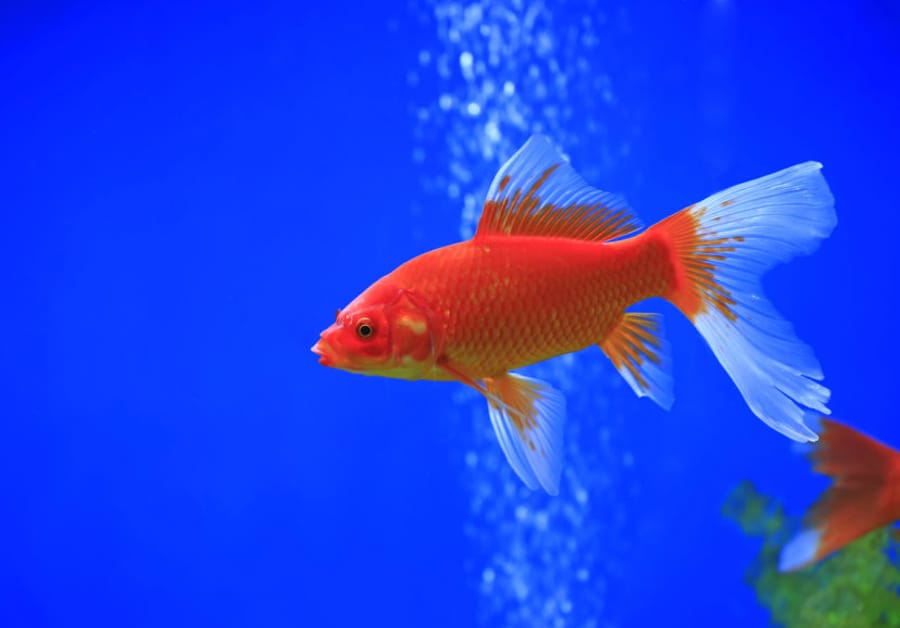 You just bought your first goldfish and are perusing the aisles of your local pet store for all the necessary equipment to give it the best home possible. Among all the bells and whistles recommended by the pet store salesperson is something called a bubbler. But what is a bubbler, and is it as necessary as the pet store employee claims?

Goldfish do not need a bubbler in their aquatic habitats if there is a filter already present in the tank. The smaller the fish tank, the higher the need for oxygenation and bubblers increase oxygen flow, particularly in smaller aquariums like a fishbowl.

What Exactly Is a Bubbler?

A bubbler is synonymous with an air pump, a device used to increase oxygen flow within an aquatic habitat. Its purpose is to create air bubbles that break up the water on the tank’s surface, where the nickname bubbler derives from.

Bubblers themselves do not create more oxygen, so much as the bubbles created help disturb the water’s surface. This process encourages an exchange of O2 intake and CO2 release via the tank’s surface, which diffuses oxygen throughout the water.

A bubbler differs from a filter in that it does not clean or filter the water so much as increasing airflow and keeping the tank’s water from stagnating.

Does Your Aquarium Need a Bubbler?

If you already have a filter for your tank, the necessity for a bubbler lessens. Depending on the tank’s size, the filter will normally create enough water movement that a bubbler will not prove necessary.

You do not need a bubbler for your fish tank, though it is recommended, particularly if you do not have the time, energy, or desire to replace the tank’s water frequently. Though not always a necessary addition, it certainly will not do any harm to introduce a bubbler into the aquatic environment.

7 Ways to Increase Oxygen Flow in Your Fish Tank

Bubblers are not the only ways to introduce more oxygen into your tank. Here are a few other recommendations to maintain optimum oxygen levels in your goldfish’s underwater home.

Installing a filter is the easiest and most efficient way to ensure a clean and safe habitat for your fish. Not only will it clear the fish’s excrement from the water, but a filter will also improve air circulation and help avoid stagnant water in the aquatic habitat.

When choosing a filter, consider the tank’s dimensions, the filter’s size and power, and how frequently you will have to change the water out based on the previous factors. External filters are recommended as opposed to internal filters.

Besides adding to the tank’s aesthetic appearance, aquatic plants will increase the flow of oxygen within the tank and aid in the absorption of gases that over time can prove detrimental to your goldfish’s health. Aquatic plants provide oxygen while also diminishing nitrates present in the tank that can be toxic to your fish, and providing a gravel base will help the plant to remain rooted in the tank.

Ideally, it is better to choose bigger and healthier-look plants for your goldfish’s habitat. Goldfish are likely to prey on any punier-looking specimens, and while not exactly bad for your fish, ingestion renders the plant’s oxygenating properties moot and ineffective.

It is important to frequently replace your goldfish tank’s water to provide your fish with the best air quality possible. Here are a few things to keep an eye on when refreshing the tank’s water supply.

Make Sure Temperatures Are Low and Water Is Moving

High temperatures and placid waters in your aquarium are symptomatic of a less breathable environment for your fish. If you do not have a filter, it is particularly important to keep an eye on the water’s temperature and surface movement.

The tank’s water temperature will climb when there is an accumulation of waste within the aquarium, making it necessary to frequently change the tepid water for colder freshwater.

Clean the Gravel When Changing the Water

It is also a good idea to clean the tank’s gravel when changing the water. The tank’s “gravel serves the dual purpose of trapping waste particles, which can either contribute to healthy nitrogen cycling or trap food and release toxic gases when your fish forages.” This makes it important to give the gravel a decent scrubbing every time you change the water in your fish tank.

Do Not Overfeed Your Fish

Overfeeding is generally not a great practice for overall health in any animal. It is better to underfeed your fish than the alternative since uneaten food essentially becomes waste in an aquatic habitat. To avoid adding buildup and rising CO2 levels in your goldfish’s watery home, only feed the fish as much food as it can consume within one minute.

Invest in a Bigger Tank

A tank with a larger surface area will lengthen your fish’s potential lifespan and encourage its growth. Since oxygen enters the tank through the water’s surface, the greater the surface area, the greater the oxygen flow. Waste from the goldfish will build up faster in a smaller space, thickening the water and increasing CO2 levels.

As such, goldfish bowls are not the best idea. We recommend to check out secondhand options for more spacious and affordable aquariums.

How to Know When Your Tank’s Oxygen Levels Are Too Low?

As discussed above, stagnant, warm water is hazardous to your fish’s health. There are two warning signs that your fish’s health may be in jeopardy. If your goldfish exhibits either of these two signs, you will need to act fast to save the fish’s life.

Below, both of these are behaviors of intense stress, the likes of which can endanger the goldfish’s life even further from the risk of fatigue and overexertion. If your goldfish is exhibiting these behaviors, you need to insert both a filter and a bubbler posthaste.

A well-ventilated tank is necessary for a healthy, happy goldfish. There are plenty of ways to introduce oxygen into your aquaria, such as installing aquatic plants, water changes, and a larger tank.

If you add a filter and bubbler, just two of the potential options for increased oxygen supply, it is arguably the most effective and least tedious. Monitoring your aquarium’s water surface, temperature, and your goldfish’s behavior are the most important things you can do to extend your goldfish’s life.

link to What Human Food Can Betta Fish Eat?

The long-finned colorful bettas are such beauties to have in your aquarium. Alongside being visually impressive, they have many attributes making them one of the most desirable freshwater...

We all know that water filtration is of paramount importance for maintaining a clean and healthy aquarium. It might sound quite a task, but it becomes laughably easy with the right filtration system...

Hi! My name is Pawan, and my hobby is fish-keeping. I have fish keeping experience with many aquarium fish like Guppies, Goldfish, Neon Tetra, Angelfish, Mollies, and Jellyfish.

On this site I share everything that I have learned about aquarium fish, fish tanks, fish tank substrates and gravel, fish tank filters, fish tank heaters, and fish food.

AquariumFocus.com is a participant in the Amazon Services LLC Associates Program, an affiliate advertising program designed to provide a means for sites to earn advertising fees by advertising and linking to Amazon.com.