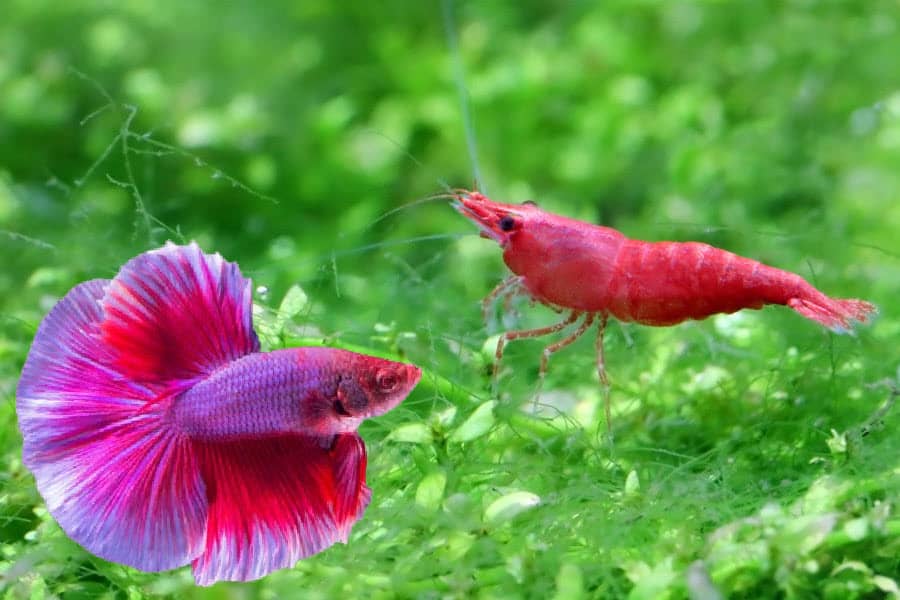 The Betta is a beautiful fish originating in Asia, where they live peacefully in the wild. They can be found swimming in slow-moving water, ponds, and marshes. The Betta is carnivorous, which makes you wonder if Betta Fish eat shrimp.

As a general rule, Betta fish will not eat a shrimp added to their tank because they are too big to take on. The shrimp that can be bought for your fish tank are larger than would be found in the wild, so they are quite safe in the same tank.

Some shrimp are safer to put into the tank because they are bigger when you first get them from the pet store. Others could become a challenge for your Betta that they gladly accept. Let’s look into this a little more in-depth.

That is not to say that if the shrimp is small and your Betta has an aggressive nature, the fish will not attack the shrimp. That is why it is crucial to keep this in mind when shopping for a shrimp to add to your tank. Some of the shrimp for sale will have a better chance of survival than some of the others, so you should know your shrimp before you buy one.

When adding shrimp into your Betta tank, you are taking a chance, just like if you try to put any other fish in the tank. Your Betta is unique, and its temperament will have a lot to do with how aggressive it is. If your Betta is a ‘one fish in a tank kind of fish,’ you will not have luck introducing anything into the tank, including any type of shrimp.

If your Betta is not all-out aggressive, you should be able to add some shrimp into the tank. Shrimp are great tank cleaners, so they are a perfect way to keep the tank fresh and clean for all the fish in it. Throwing them together without a plan is not in your best interests, so make sure to go through these tips and check them off before introducing the two.

The final aspect is the Betta itself. If you have an aggressive fish, you may find that the size of the shrimp does not matter because the Betta will attack and kill it anyway, just because it is territorial. If you have noticed that your fish is aggressive and likes its own space, you may not want to put shrimp into the tank.

If you find that your Betta continues to attack your shrimp, you may want to either stop trying to incorporate a shrimp into the tank or adjust the temperature and the airflow to make them more docile. Any fish in its optimal living conditions will be more energetic and territorial. If the tank is off by a little bit, it could allow the combination of the two, but be careful not to adjust things too far because you will end up killing them both.

Betta fish will not eat shrimp the same size as themselves, but they will have no problem attacking and killing it if they do not like the idea of sharing. You need to understand that the Betta Fish you buy from the pet store is grown on a farm in Thailand, or some other Asian country, where they are confined in small jars and cups.

This makes them more aggressive than they naturally are because they have learned that they need to fight for the space that they are in. If possible, buy your Betta from a vendor that sells fish caught from the wild because they will not be as aggressive and will be used to sharing their living space with other creatures.