The freshwater angelfish is one of the most popular species for tropical fish tanks. They come in a variety of colors and patterns and can live for 10 years or longer. When introducing them into a new aquarium, you should take their adult size into account.

The average angelfish can reach lengths of six inches (152.4mm) and can be up to eight inches (203.2mm) tall. Their fastest rate of growth will occur in the first six months, going from under 0.63 inches (16mm) to 4 inches (100mm). From there it can take another six months to achieve their fullest length and height.

In this article, we will discuss some common types of angelfish, along with their varied sizes and how their care at home can affect their growth rate. We will also look at the average growth rate of the angelfish.

Freshwater angelfish belong to the cichlid family and are most commonly found in South America. Although they were originally silver as standard, there are now a number of colored variations from years of breeding.

Let’s take a look at some common types of angelfish that will thrive in a freshwater aquarium.

The silver angelfish are the closest relation to that of wild angelfish. Because of this, they are the easiest to care for and are able to adapt well. They normally have three black stripes and will grow to be around six inches.

In the wild, they have been known to reach up to 10 inches in length.

As the name would suggest, this type of angelfish can be distinguished by the four to six stripes across its face and body. Some will develop red eyes as they mature and will reach up to between six to ten inches in length.

If you choose to have only zebra angelfish, make sure they have ample room to grow. These fish spend lots of time swimming and cramping them will prevent them from growing to their fullest size.

Younger Koi Angelfish often had a red hue around their eyes which will fade as they mature. Bred to resemble the Japanese Koi fish, they are typically orange in color with some darker marbling.

Though they can usually survive in many different water conditions, the darkness of their orange color can alert you to their stress levels. As the fish becomes more stressed, their color will deepen and darken.

This type of angelfish is usually very light and almost translucent in color. Due to this lack of pigmentation, you can often see the red coloring of the gills which appears in the same way as blushing cheeks.

They do not have stripes and their only distinguishing feature is the blush of the gills.

The marbling of the marbled angelfish can come in a number of different colors, including with hints of gold. Each fish has a unique pattern and they make excellent colorful additions to any tank.

As with any creature, no two angelfish will grow to the same size at the same rate. When we discuss sizes and timelines in this article, we are using average numbers taken from a number of breeders.

As mentioned above, most angelfish will almost triple in size in their first six months. Even at the small size of 4 inches (100 mm), they are considered adult fish at this age. However, their growth-rate will drastically reduce after this and it can take more than a year for them to reach their largest size.

The condition of the water in your aquarium can affect the growth rate of your angelfish. To ensure the strongest and most healthy fish possible, you should always strive to have the cleanest water possible.

Ideal levels of both nitrate and ammonia would be zero. Where this is unachievable, you should aim for the lowest readings possible. In order to accomplish this, you should be performing frequent tests on your water and should be changing the water often.

Adding a variety of plants to your tank is a great way to keep nitrate numbers down along with providing color and food for your fish. You should strive for a pH reading between 6.8 and 7.

Being tropical fish, the angelfish prefer a tank temperature of 75 – 82°F (23.89 – 27.78°C). Additionally, angelfish like plenty of light. This can be eight to twelve hours of natural sunlight, or artificial light will suffice.

Since they like to dig, the substrate of your tank should be soft enough so as not to cause injuries. Sand and mud should make up the vast majority of the floor, though you can add some rocks to certain parts.

Natives of slow-moving streams in the Amazon, you do not need to provide much movement in your tank. Aeration will be enough for this breed. 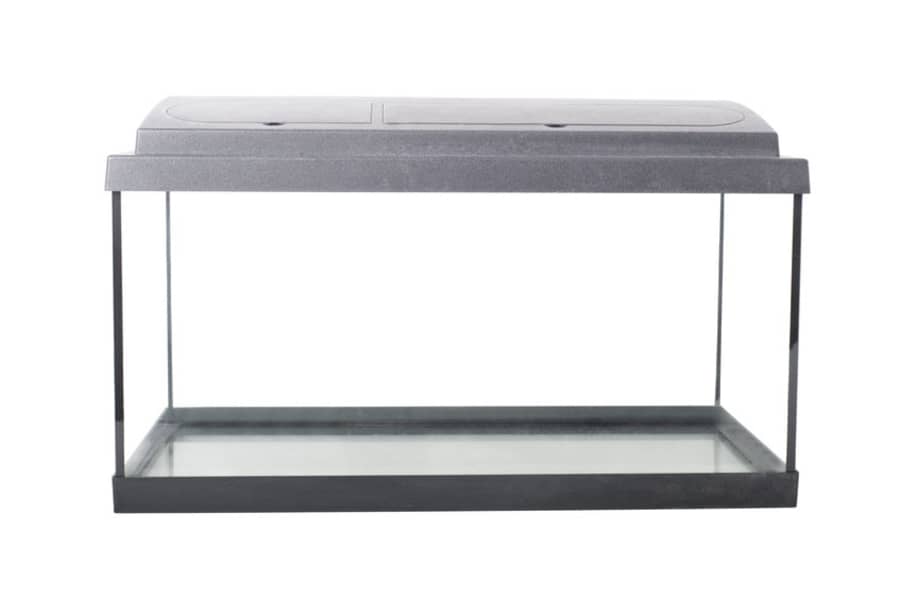 These fish tend to become aggressive when mixed with other species of fish and can even form hierarchies amongst themselves. They are best kept in a tank with their own, in a group of no more than five or six.

In general, each freshwater angelfish will require at least 10 gallons (37.85 liters) of space. For a small school, you should be looking at a tank that is a minimum of 80 gallons (302.83 liters). However, the bigger the tank the better for this fish.

The growth rate of your angelfish can be directly affected by their diet. How much they eat, how often, and what they eat can stunt their growth if in short supply.

Being omnivores, they require a high protein diet with plenty of fiber. Though they will eat some plant-life, most of their nutrition should come from their feed.

Some feed options can include:

Angelfish are big eaters and need to be fed twice a day. Their young will require multiple feedings per day, and mating pairs should eat three or four times a day.

An excellent way to ensure they are getting enough fiber is to add cooked vegetable scraps, such as spinach or zucchini.

How Fast Do They Grow?

When looking at angelfish, some may grow faster than others. This can be due to genetics, water conditions, and feed type. But in general, you should see certain milestones. Ideally, your angelfish should be:

Of course, these numbers are not set in stone and you will likely see some differences as your angelfish grow. For smaller tanks, you will see smaller growth rates than if they have more space.

You should also take into account which species of angelfish you have. For example, the Majestic angelfish which has a vibrant blue coloring will rarely grow larger than seven inches. This can take as long as five years to achieve. On the other hand, the French angelfish can grow as large as ten inches in less than a year.

Although some wild angelfish have been known to grow as large as 10 inches, the average size of an angelfish in a freshwater aquarium is six inches. Though they will grow rapidly at first, reaching up to four inches in six months, it can take up to a year (and sometimes longer) for them to mature to their fullest size.