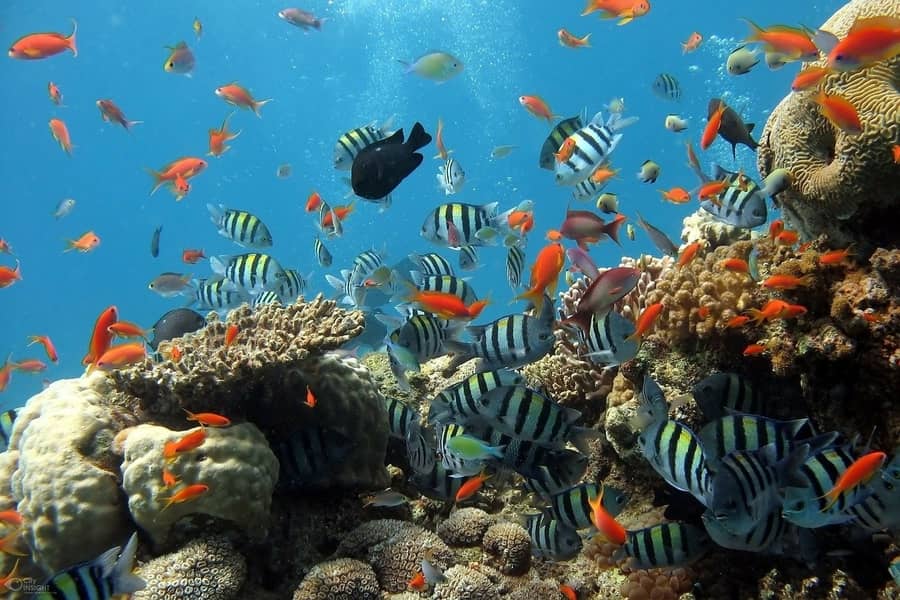 The National Pet Owner’s Survey for 2109-2020 reported that 11.5 million Americans keep freshwater fish, and 1.6 million own saltwater species. With these staggering figures, it is a point of concern that many fishkeepers do not provide adequate space for their fish. If you are concerned that you may be overcrowding your aquarium, the signs should be relatively easy to spot.

You will know if your fish tank is overcrowded when your fish show signs of stress, aggression, toxicity, and lack of oxygen. Overcrowding causes stress reactions that stunt growth, lower immunity, and make fish prone to disease. To solve overcrowding, rehome some of the fish, or buy a larger tank.

An overcrowded tank is not only dangerous to the health of your fish; it is a form of cruelty to the fish in your care. If you are unsure if your tank might be overcrowded, how it may harm your fish, and what to do about it, please read on.

An overcrowded tank causes stress in a fish, much like it would in any vertebrate. Unlike temporary stress, which a fish may recover from and regain its homeostasis, long term stress such as overcrowding has several physiological responses:

Due to the fish’s compromised immunity, the fish become vulnerable to fungal and bacterial infections and other fish diseases. Illness associated with overcrowding include:

When a fish is under the long term stress of overpopulation, their growth may be arrested. Many people ascribe to the myth that your tank’s size will dictate your fish’s development when it is more likely that it is the stress that causes your fish to exhibit slow or stunted growth. When fish face stressors such as overcrowding or poor water conditions, their stress response can affect the fish on a cellular level.

Temporary stress can be adjusted in the fish to regain homeostasis and revert to normal functioning. Chronic stress over the long term, such as overcrowding, affects the hypothalamus-pituitary-interrenal (HPI) centers to regain their hormonal balance. This reaction will compromise the immune system, increase vulnerability to disease, and reduce growth.

Evidence suggests that cortisol, which is a result of HPI activation, is related to food intake and appetite regulation. This means that the food intake decreases while the stress response increases the depletion of glycogen stores, further depleting your fish’s energy and health.

Any time the ammonia levels in a tank rise, the nitrate (NO2)levels rise correspondingly and can be a significant fish mortality factor. Both ammonia and nitrates are highly toxic to fish, and nitrites are less toxic but may also be deadly at elevated levels. Nitrates at excessive levels are taken in by the gills and into the bloodstream, where it oxidizes hemoglobin to methemoglobin, causing tissue hypoxia.

Nitrite poisoning is commonly known as ‘brown blood disease’ because of its brown discoloration due to increased methemoglobin levels. Methemoglobin is incapable of carrying oxygen so that the fish may suffocate even in an adequately oxygenated tank. Symptoms of Nitrite poisoning are:

What to Do if Your Nitrites Are Too High?

It would be best if you immediately decreased your fish population to decrease the ammonia levels and add sodium chloride or calcium chloride (non-iodized) at <50mg/1, which will reduce the nitrate iron damage to the gills. Ensure that your nitrite levels remain below 20mg/1 in freshwater tanks and to prevent nitrite toxicosis.

As fish give off waste products from the feeding cycle, the nitrogenous waste breaks down into ammonia (NH3), which is highly toxic to fish. In nature, where the water to fish ratio is naturally high, waste becomes diluted to harmless concentrations. However, ammonia may build up in your tank in a matter of hours due to overcrowded conditions and reach toxic levels.

In the nitrogen cycle, ammonia becomes converted to its less harmful nitrogen compounds via specialized bacteria which convert ammonia NH3 to nitrite (N02-) and nitrates to nitrates N03-) Nitrates are similar to nitrates as they both consist of oxygen and nitrogen molecules, but nitrates are a more reactive compound than nitrates.

Although nitrates are a natural byproduct of fish waste, they may lead to nitrate poisoning and nitrate shock in high concentrations. The primary cause of nitrate related toxicity is the overcrowding of a fish tank. Some fish will react to levels as low as 20mg/l, while other fish have a higher nitrate level capacity. A sudden increase in nitrates may cause the following symptoms:

What to Do if Your Nitrates Are Too High?

Ideally, you want to lower your nitrate levels to below 15ppm, and you will need a good quality water testing kit for this purpose for accuracy. It is crucial that you perform a water change of at least 40% to reduce nitrate’s toxic levels. However, as fish may react to sudden spikes in nitrates, they may also react to sudden drops. Ensure that you spread the water change out by 5% increments an hour until your 40% change is complete.

This water change is only a temporary relief, and your tank must be depopulated to eliminate the cause of the nitrate toxicity. The elevated nitrate levels are merely a symptom, and you should address the cause as soon as possible.

Overcrowding and Ammonia Build Up

Ammonia is one of the most common culprits in fish mortality. Although it may happen at the setup of a new tank, it is often a result of an overcrowded fish tank. Ammonia poisoning occurs when ammonia spikes, and it usually shows a corresponding spike in ph levels. As ammonia is a base, it is stabilized by acidic water, but it may damage the gills at levels as light as 0.25mg/L.

What to Do if Your Ammonia Levels Are Critical?

Your baseline ammonia level should be zero, as only a tiny concentration may be deadly for your fish. If your levels are above 1ppm (part per million), you will need to treat your tank immediately. A 50% water change over several changes should provide temporary relief, lowering the pH of your tank.

It would be best to restrict your feedings so that additional ammonia will not be created by additional food waste, or stop feeding your fish entirely until the tank has stabilized at a zero ammonia level.

If your tank is overcrowded, the tank’s oxygen levels may not provide sufficient oxygen to the tank inhabitants. This lack of oxygen is a serious issue and should be dealt with immediately due to the high possibility of mortality. The time to act is when the first fish start exhibiting signs of oxygen depletion. Not all the fish may exhibit distress simultaneously because some fish require more oxygen than others. Symptoms of low oxygen include:

What to Do if Your Oxygen Levels Plummet?

When your oxygen level is critical, time is of the essence, so emergency measures should be taken immediately to save your fish from suffocation. Emergency steps include: 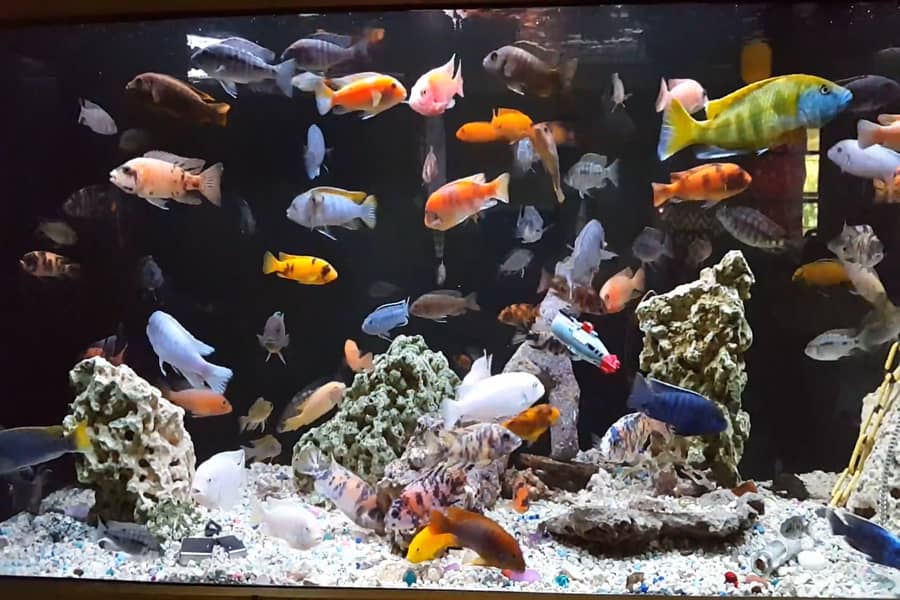 He focused his study on young cichlids to eliminate mating aggression and found a direct correlation between aggressive displays and smaller tank size. He noted that the average home aquarium was still one-tenth of the tanks’ size to evidence docile fish, which is quite alarming.

His study was twofold: the one study decreased the number of fish in a small tank, and the other kept the population of fish the same and enlarged their tanks. He found that even when the tank was not overpopulated, the level of aggressive behavior in small tanks was far higher. Aggression dropped considerably when the tank size exceeded the 100-gallon mark, which contained hiding places and several plants that formed alcoves.

The study results have implications for home aquarium owners as even when correctly populated; fish tend to exhibit aggression in smaller tanks. Aggression is linked to the stress response in fish and is caused by both population density and the inability to swim unimpaired swimming and social behaviors. In a Humane Society of the United States report focusing on stress and pain consciousness in fish, providing free movement areas was considered crucial for maintaining healthy fish densities.

The report noted that differences in sizes are amplified in confined conditions and result in larger fish dominating the food supplies. Large fish typically grow larger, while smaller fish growth is slowed due to lack of food access, and their growth is inhibited due to chronic stress.

A review of recent scientific literature on fish welfare and stress and debates on pain and consciousness in fish reflect growing concern for the well-being of fish. The report found that inadequate space and elevated densities resulted in fin, tail, eye nipping, ramming injuries, and suppressed growth.

Furthermore, the stress of inadequate tank size and density and the corresponding aggression caused by stress had implications for fish health. Injuries from an aggressive attack further increase the risk of infection in the fish. A study of Jack Dempsey Cichlids found that tank habitats with a low habitat complexity are also linked to increased aggression in the cichlids under study.

How Many Fish Is Too Much In an Aquarium?

There are many differences in opinion about how much fish are considered too densely populated to the tank’s circumference. The humane society puts forward that most regulations regarding tank size and density only consider a fish’s physiological needs and do not factor in the spatial and behavioral requirements. Unimpaired swimming and social behaviors and limitation of aggression are also crucial factors in fish welfare.

More and more scientific evidence supports that fish can feel pain and that welfare rights should extend to fish in captivity. PETA suggests that a fish keeper should provide 24 square inches of water per inch of fish. At the same time, the Ornamental Aquatic Trade Association (OATA) defines their parameters of fish stocking density as such:

The ‘gallon per inch rule’ is popular for fish retailers, but it fails to consider certain essential factors.

Many people merely use their aquarium capacity to measure the fish to water ratio and fail to consider the filled tank’s accurate volume. People hardly ever fill a tank, and substrate, vegetation, and features such as rocks reduce your volume substantially. Substrates and decor can quickly reduce your tank’s maximum volume by 10-20%, which correspondingly lessens the available oxygen and dispersion of built-up CO2.

The surface area of your tank provides your fish with the essential space for their gaseous exchange. The larger your surface area, the more access your fish have to exchange oxygen. Typically when calculating the fish to volume ratio, people do not consider factors such as:

Your tank dimensions are particularly breed-specific, and larger fish require larger dimensions than the average 1 inch to the gallon myth. You should always take into account the adult size of your species and not the size at purchase. Gallon amounts don’t consider factors such as turning clearance and freedom of movement for Cichlids species.

The fish size to volume ratio does not consider the specific breed tendencies and behaviors of the intended fish. For example, you might provide ample space for a more aggressive Cichlid species without considering their territorial natures. You might end up with fatalities in your tank.

Some fish species exhibit schooling behaviors and become stressed and unhealthy if you do not provide them with companions. For example, you should house Neons Tetras and Danios with at least six companions for them to thrive.

Overcrowding your fish tank not only endangers your fish and compromises their health, but it also has ethical implications. In 2004 Monza, Italy, banned keeping goldfish in bowls due to the inhumane living conditions that the goldfish experienced. More and more scientific data has risen that fish are intelligent creatures with the capacity to feel fear and pain. Fish keepers should try and replicate their fish’s natural behaviors and movements to the best of their ability.