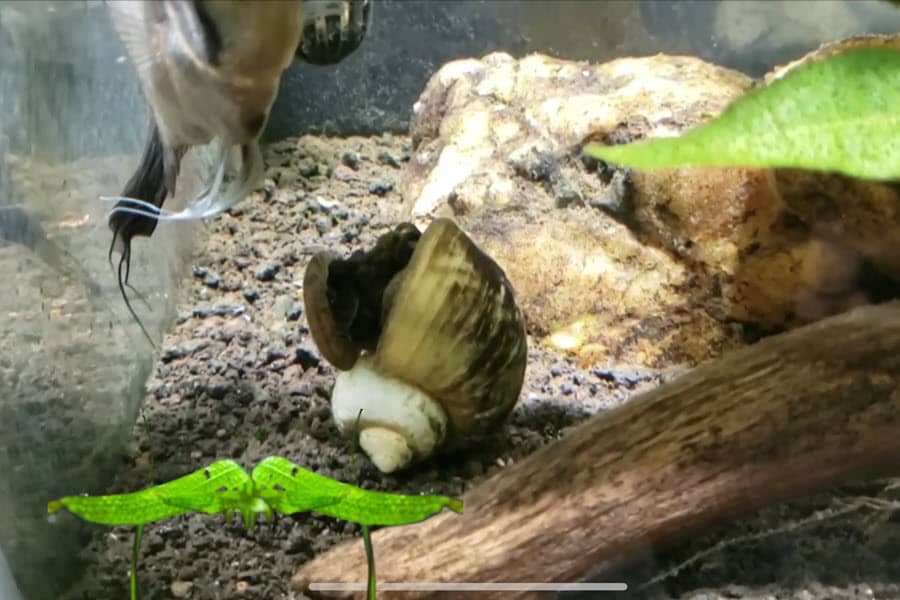 If you have freshwater mystery snails in your tank, then you know raising them is hard, and what’s even harder is to tell if a mystery snail is dead or not. You probably don’t know if a snail is dead, and you can’t blame yourself for that; even some experienced hobbyists have a hard time determining it.

It’s only natural for snails to lie dormant, sleep, and not move for quite some time, which can make you think they’re dead when they’re not. So how to tell if the mystery snail is dead? Well, keep on reading to find out!

In this article, you’ll know the signs to look for to decide whether the snail is alive or dead.

So without further ado, let’s get into it-

How To Know If Mystery Snail Is Dead?

To tell if a mystery snail is dead, you can perform some basic checks like taking the snail out of the tank and smelling it; if it smells rotten, it’s dead. You can also look at the snail’s shell. If the shell is cracked or broken, the snail is likely dead.

There are more ways to know if your mystery snail is dead, and I will discuss them in detail in this article.

Here are 6 ways to determine if your mystery snail is actually dead:

Dead Snails, like other aquatic animals, decompose quickly, so you first need to take the snail out of the tank and give its foot (it is the flat portion that acts as a “door” to the shell) a good sniff. If it smells terrible, rotten, and stinks, then sorry to say that, but the snail is dead.

Whenever a snail dies, ammonia is released, which is harmful to other aquatic animals. It is, therefore, important that you remove the dead snail as soon as possible because if you don’t, the ammonia spike might harm other creatures, which could lead to them dying, creating a domino effect.

The test is simple; when you find the snail sitting at the bottom of the tank and not moving, you can put some food nearby and watch closely for any movements. If the snail does not move to eat the food, you can proceed with the next checks.

Gently tug the operculum of your mystery snail, and if you think there is any resistance, it means it is still alive, but if there is no resistance at all, it means the snail has passed away.

The operculum is a trapdoor-like structure attached to the snail’s foot’s top surface. When a predator or environmental threat is present, it can close the shell aperture by retracting its body.

After death, the snail’s body shrinks, and the shell will appear empty or cracked, which is another indication that the snail has died.

Generally speaking, if the snail is hanging out of the shell and not retracting when you pull the shell, it’s dead.

5. Check It In A Separate Container

If you’re still unsure about the status of your snail, you can place it in a separate container with some aquarium water from the tank for a day or two to see if it moves.

The snail, if alive, will likely try to move and explore the new environment around it.

There are some signs that are obvious indications of a dead snail. Like if the snail is falling out of the shell and not retracting when you try to pull the shell, then it generally means it’s dead. Another thing you can notice if the snail dies is the shell; it will look dull. Also, a discolored snail means it’s dead.

How To Tell If Mystery Snail Is Alive?

The obvious way to tell your snail is alive is, of course, by watching; if it moves even a little bit, it is alive. Moreover, if the snail is holding on to the aquarium wall or sticking to the filter, decorations, or anything in or outside the aquarium, it is alive because a dead snail can’t be stuck to anything.

Last but not least, after you tap it several times and if it retracts or responds with any movement means it’s alive.

No, mystery snails don’t die easily; in fact, they are quite handy creatures and can roughy live for around 1 year. However, if water parameters and temperature are not suitable or if the snails are not cared for properly, then yes, they can die.

As mystery snails are freshwater snails, the most common reason for their death is unfavorable water conditions, so it’s essential to keep an eye on the water parameters in your tank and make sure they are within the ideal range.

Other than that, mystery snails can also die due to a lack of food or if they are not getting enough calcium which they need to build their shells.

To sum it up, mystery snails are not that difficult to care for, but you need to make sure their environment is suitable for them and that they are getting enough food and calcium. If you do that, then you shouldn’t have any problems with them, and they should live a long and happy life in your aquarium.

Why Is My Snail Not Moving?

There are a variety of reasons why your snail might not be moving. It could be sick, hibernating, or it’s just resting.

Unlike some creatures, mystery snails can sleep for two to three days, so don’t worry if it’s not moving.

Now let’s talk about hibernation. During hibernation, an animal’s metabolism slows down, and they do not need to eat or drink. Snails are one of the many animals that hibernate. Mystery snails in tanks usually do not hibernate, and they only do it when they are not fed well.

Why is my Mystery snail floating? Does it Mean it’s Dead?

Floating in the aquarium is completely normal for a mystery snail, and it does not necessarily mean that the snail is dead. Snails generally float to use the water current for traveling to new environments. Doing so helps them save energy, and it is a fast way to explore places with more favorable water parameters.

However, if they are floating for too long and too frequently, it does mean they are not happy with the water condition of your tank, and you should check it to see if there are any issues.

So that’s it for this article. I hope this article has helped you with tips that you can use to tell if your mystery snail is dead.

If you ask me what’s the best way, I would say the best way to check if it’s dead is to smell it; if it smells awful, it is dead.

Before you leave, I have one final piece of advice, i.e., don’t judge too quickly that your mystery snail is dead before performing any checks. If it’s not moving, give your snail some time, and you might be surprised.