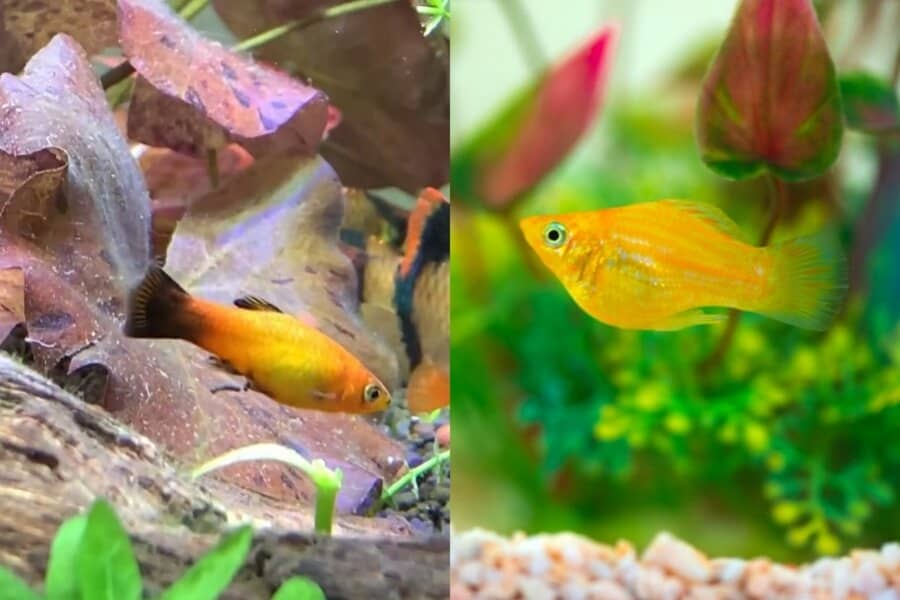 Mollies and Platies are tropical freshwater fish who give birth to live young, and both have a shared family – Poeciliidae. These two species are highly popular for their bright colors and high activity levels and sought by amateurs and experts alike. However, they can be tricky to tell apart.

To tell a Platy fish apart from a Molly by its size and shape. Platies are smaller and rounder in shape, measuring up to 2.8 inches (7 cm), whereas Mollies have an elongated and larger body size, up to 4.5 inches (11.4 cm) long.

The main difference between a Platy and a Molly is that they belong to different species. The Molly is from the Poecilia family and the Platy from the genus Xiphophorus which means they cannot interbreed. If you wish to learn what makes up the Molly and Platy family and how to tell them apart, please read on.

What Is a Platy? 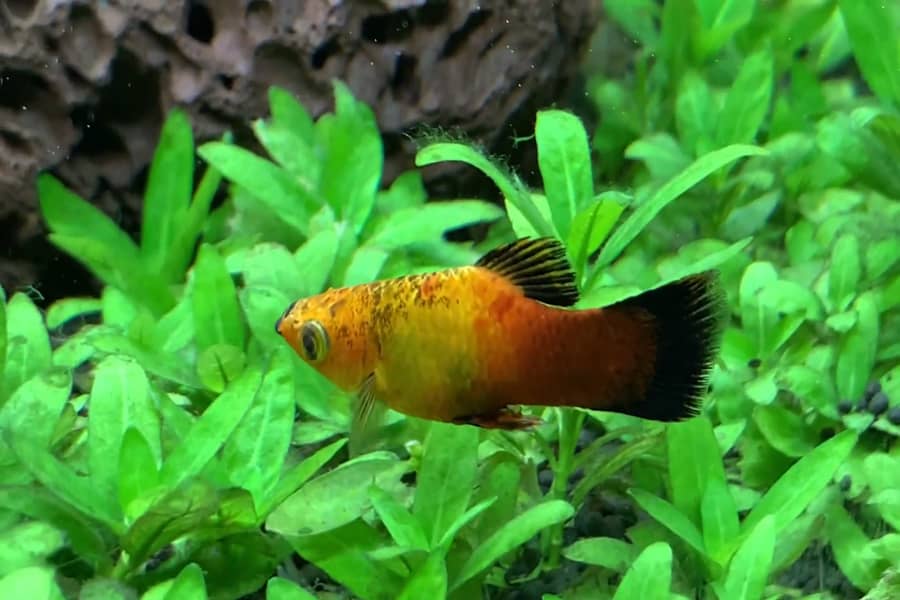 The Platy is a freshwater fish of the genus Xiphophorus, and like Mollies, are live-bearing fish of the family Poeciliidae. The name Platy came from an older classification, Platypoecilus, which comes from the Greek word meaning ‘flat’ or ‘broad.’

Platies are indigenous to the east coast of Central America and the southern parts of Mexico. There have been a variety of hybrids between the Southern (Xiphophorus maculatus) and Variable Platy (Xiphophorus variatus), and often the rare Swordtail Platy (Xiphophorus xiphidium) has been added to the mix to produce a greater variety of fin shapes.

These three species collectively make up what we know of as Platy today and all of which may hybridize with one other. Both the Southern and Variable Platy are relatively short and stocky and exhibit a variety of colors. The most popular colors are yellow, red, green, and blue, which are thought to have originated as an adaptation to their natural habitat.

Several popular breeds originate from the Southern Platy which includes:

Popular breeds that originate from the Variable Platy are:

What Are the Popular Varieties of Platys?

The species that make up the Platy breed are highly interbred, and many specimens sold in the industry are hybrid forms. Several Platies have been bred so exhibit specific color characteristics such as:

What Are the Platy Characteristics? 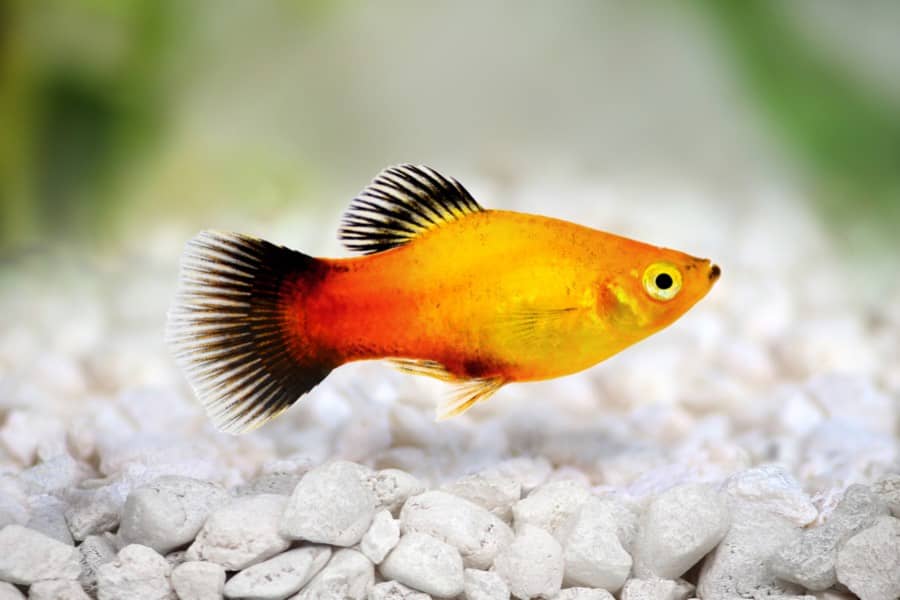 Platys are small and laterally compressed, which means that viewed from the side, they appear normal, but from above, they appear narrow or flattened. They are characterized by compact and short fins and a roughly fan-shaped tail. Both the variatus and the Southern Platys lack the extended tailfin of the more rare Swordtail Platy (Xiphophorus xiphidium).

The variatus Platy (Xiphophorus variatus) also grows to 2.8in (7.0cm) and sports an olive color and black, marble-like spotting in the wild. The variatus is typically slimmer and more elongated than its Southern counterparts. Their fourth pectoral ray shows saw-like notches, and they usually have 12 dorsal rays and two rows of jaw teeth.

Platies are not an aggressive breed of fish species, and unlike most non-aggressive fish, they are not shy. They share tanks very well with Mollies and guppies and Swordtails. However, they can become aggressive if there is an unbalanced male to female ratio or changes in their environment. They may also exhibit aggression if their tank is overpopulated or there is a lack of hiding places.

Platies are a pleasure to breed and reach sexual maturity at only four months old. In fact, they have such a high breeding rate that they can quickly overwhelm your tank. Because they are such avid breeders, your male to female ratio should be at least 2-3 females to one male to prevent stress in the female population.

Unfortunately, Platies don’t make great parents and often cannibalize their young, so care should be taken when the fry are birthed. The female Platy’s gestation lasts 24-30 days on average, and it can give birth up to 20-80 live young at one time, but more commonly, the Platy will produce 20-40 young.

What Is a Molly Fish? 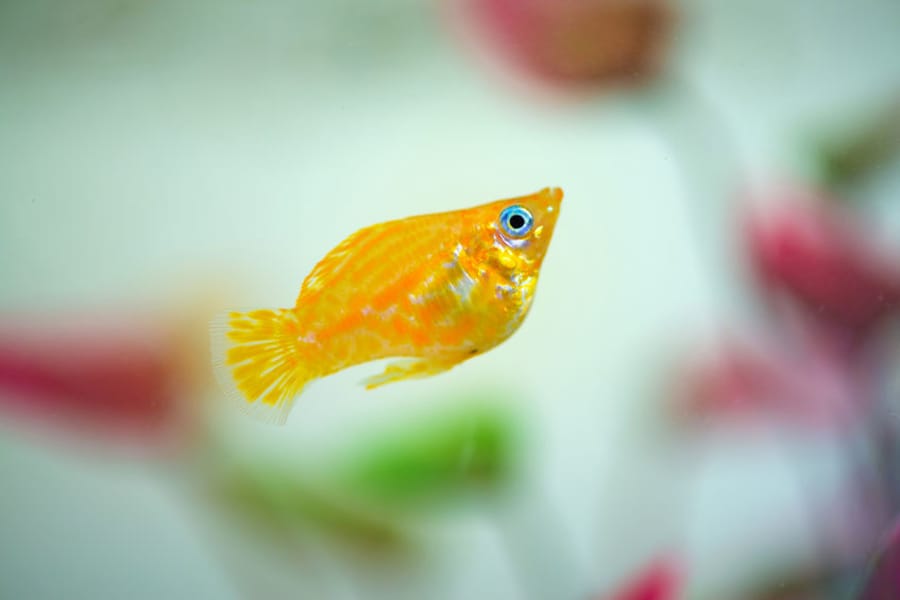 The Poecilia sphenops or Molly is a freshwater fish species, sometimes known as a common Molly or short-finned Molly. Mollies got their name from their original genus classification Mollienesia, which is now the Poecilia genus. They originate in Mexico’s brackish and marine waters and exhibit a dull silvery color in their natural habitat.

The common Molly is found from Mexico to South America’s northern areas, while the Sailfin Molly comes from the Gulf of Mexico and the USA’s South East coast. The sailfin or Yucatan Molly P. velifera is indigenous to the southeast Mexico area of Yucatan.

The Molly was introduced to fishing hobbyists in 1899 and has grown in popularity ever since. Mollies tend to be more aggressive than their Poecilia cousins, such as the guppy and the Platy. There are many hybrids in the Molly family, and they exhibit a wide variety of colors and are divided into three main types that are distinguished by their short or long fins:

The Molly fish breed has given rise to many colorful and unique color and shape variations such as:

What Are the Popular Breeds of Mollies?

Mollies are a very popular breed due to their high growth rate, brood size, and reproduction ease. The two main breeds that give rise to so many beautiful colors and shapes of the species are:

The common Molly or Poecilia sphenops are the smallest of the three breeds, and the males are noticeably slimmer than their plumber female companions. When bred in tanks, males reach 3 inches (8cm) and the females 4-5 inches (10-12cm). If you encountered a common Molly in their natural habitat, you would find them growing up to 8 inches (20cm).

The common Molly has given rise to several subspecies and multiple color varieties with males that are typically more colorful than females. This species has given rise to both the black Molly and lyretail Mollies.

The latipinna sport a variety of colors and can also be found in albino and black or speckled forms.

Because they are so similar in shape and size, they may be differentiated by the number of rays each has on their dorsal fin. The Sailfin Molly has around 14 rays, while the Mexican Sailfish Molly has close to 18 rays. Mature males display an enlarged dorsal fin and colorful caudal fins to attract mates. This fish can reach 6 inches (15cm) in captivity, making it bigger than the typical Sailfin.

What Are the Molly Characteristics? 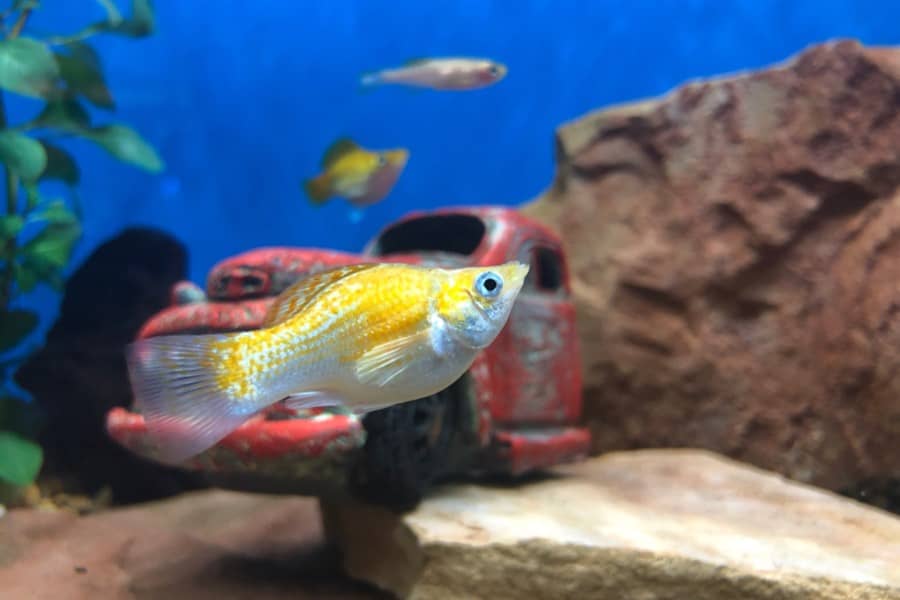 The wild Mollies tend to be a dull silver color, with mature males exhibiting blue/green color.

Their sides, backs, and dorsal fins are typically covered in spots that may become so numerous that they form one large pattern. Individuals of the species exhibit a wide range of colors and usually display silver, black, and yellow-orange.

Their bodies are oblong with a small flattened head with protruding jaws that function as a tool to rasp algae from surfaces. It has two rows of teeth, the outer row of which is the largest.
Mollys have stout, thickset bodies with tails with a convex rounded edge and angular dorsal fins.

They have characteristic mouths that turn sharply upwards. This upward turning mouth is a genetic design to allow them to skim the water’s surface for oxygen.

Mollies are generally easy to breed, except for the Veiltail and Lyretail varieties (which have an excessively long gonopodium due to selective breeding.) Due to their intense breeding patterns, you should keep your male to female ratio 1:3 in your tank to prevent female harassment.

Mollies may store sperm in their bodies for months and produce up to five batches of live young after every successful mating. This fact is the reason why many novices presume their Mollies are interbreeding when, in fact, they are not. The common Molly may birth between 20-150 fry each batch while the Sailfin Molly produces between 20-100.

Mollies are rarely aggressive and spend most of their lives in shoals in nature. They can exhibit aggression when overcrowded or in a tank with an unbalanced male to female ratio. Male Mollies can harass females for reproduction, but generally, this won’t be a problem if you have the correct male to female ratio.

How Do You Tell a Platy From a Molly?

There are several differences between the Platy and Molly breeds, including behavioral, biological, and physical. The most obvious differences are:

Can platies and mollies live together?

Yes, you can keep platies and mollies together in a community tank. They get along well and have similar water and tank requirements.

Mollies are often peaceful and friendly, but sometimes the male gets aggressive and may fin-nip the tank mates.

Can you crossbreed mollies and platies?

No, mollies and platies are incompatible to crossbreed. Crossbreeding requires both species of fish to be closely related with similar congenital traits (DNA).

Do mollies clean the tank?

Mollies are undoubtedly one of the best algae cleaning crews for your aquarium.

Can mollies school with platies?

First of all, mollies are not schooling fish. They prefer company and interact with other tankmates but don’t school. Moreover, you can’t mix and match fish to make up a school unless they share the same scientific name.

Which is better, molly or platy?

Both fish have similar tank requirements and can be fed the same food items. The best way to choose between molly and platy is based on their physical attributes and personalities.

It is not always easy to tell your Molly from a Platy or vice versa, especially to the untrained eye. The genetic differences and distinctive gonopodium can hardly be captured without a microscope, so it’s best to know the specific colorations and sizes of your Platies and Mollies. If you are still uncertain by eye, you may always send a photo to a forum or expert for their advice.