Whether you have caught a few at the lake or sought them out, if you’re planning to bring Bluegill home, there are a few things to consider when introducing them to an aquarium setting. One of the key factors in their survival will be their diet.

Bluegill are carnivorous and opportunistic fish. The food you can feed Bluegill in an aquarium are as follows:

Although Bluegill will eat a variety of small fish and feed pellets, they do prefer minnows, baitfish, and insects, like grasshoppers. In this article, we will discuss a few great options that you can use to feed your Bluegill at home.

Before introducing Bluegill to an aquarium, be sure you have an appropriate size. A good rule of thumb is to have one-inch-per-gallon. This means that for two average-sized Bluegill, you will need at least a 25-gallon aquarium (94.64 liters).

In order to better their survival, you should aim to make the environment as close to that of what they are used to in nature. This will include:

Since Bluegill are carnivorous and mildly aggressive, it is not advised to keep them with other species of fish. However, some larger fish should be safe to introduce in a large enough tank. For example, bringing bottom feeders, such as catfish, should not only be safe, but they will also help to keep the tank clean. 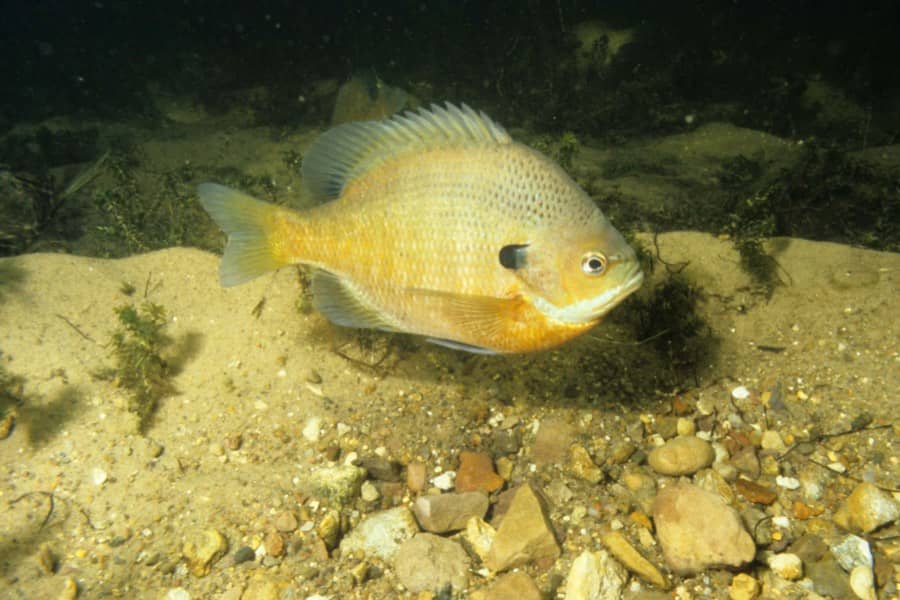 It is recommended to feed your Bluegill once a day for a short, 10-second period. Though they can survive for a few days without food, this could increase their drive to hunt, making them more aggressive. Any food leftover should be removed to prevent it from spoiling the water.

The Bluegill diet is also dependent on the seasons. It is common to see a shift in what they eat given the time of year and what is available:

What you feed your Bluegill in an aquarium should mirror what they eat in the wild. Though they will eat certain manufactured products, you should aim to feed them with a variety of small fish and plant-life.

Baitfish are small fish caught and bred specifically for use in baiting larger fish. Typically gudgeon, anchovies, and halfbeaks, they are used because they breed quickly and are readily available. 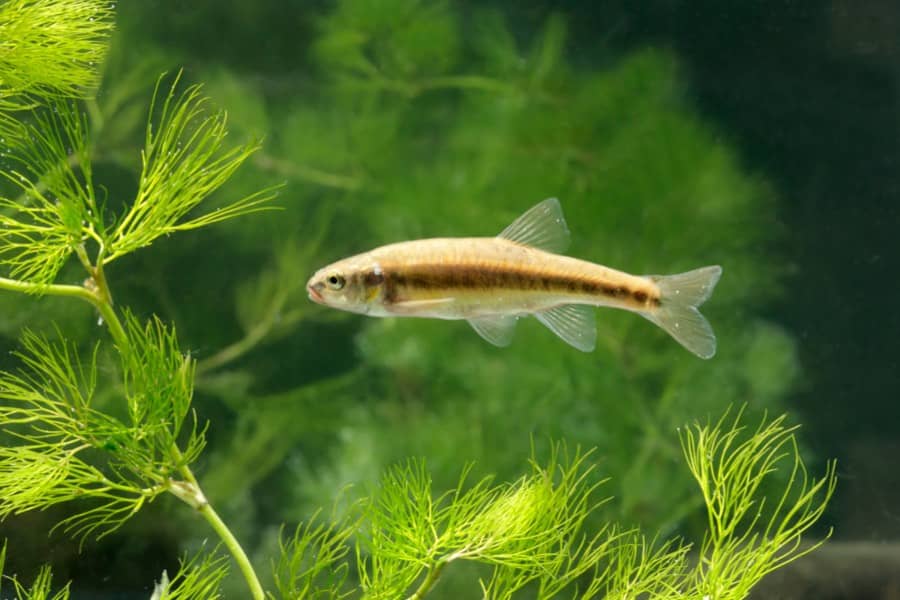 The minnow is actually the collective name for a group of small fish species. These freshwater fish are a popular choice for Bluegill and due to their nature, can incite the prey drive on Bluegills through thrashing in the water.

In some cases, people will trim the tail fish from the Minnow to encourage their struggle and make the hunt easier for the Bluegill. However, Bluegill will naturally avoid diseased or unhealthy-looking fish. To avoid this, ensure your Minnows are alive and healthy and introduced quickly to the aquarium.

Better for larger and mature Bluegill, this collection of fish are usually silver and can grow to be around two to three inches long (50.8-76.2 mm). They have been observed as Bluegill feed in nature in the Summer and Fall months.

Readily available in most bait shops, these fish are known to contain a number of nutrients that can keep your Bluegill satisfied for longer.

Not as easily obtainable as shiner fish, suckerfish are loved by Bluegill. These smaller, cylindrical fish are small enough to be great feed for several species.

Catching these fish is not easy. They are fast-moving and you will need to weigh your lure to rest on the river bed. Even hovering just a couple of inches above will miss them. Using live bait directly on the bed of the river will almost certainly guarantee success in catching these little fish.

Bluegill love to eat insects, including mosquito larvae and mealworms. They will often prey on insects that have become stuck on the surface of the water.

If looking to feed insects or larvae to your Bluegill, you will need to ensure they are as fresh as possible. They need to be living when they enter the water.

In the video below you will see conservationists releasing Bluegill into the wild to control the mosquito population:

Nightcrawlers, such as spiders, moths, grasshoppers, and mosquitos are a large part of the Bluegill diet during the summer months. Grasshoppers are also used as bait when fishing for Bluegill.

Although they are preferred alive, you can often find them frozen or freeze-dried and will make an excellent addition to your Bluegill’s diet.

Some crustaceans are too large for Bluegill, making them great tank-mates. They will feed on algae and keep the tank and water clean. However, in the event that they breed, the Bluegill will jump at the chance to feed.

Freshwater shrimp and small crayfish are the best options and are most popular amongst Bluegill after they have molted. In this stage, they shed their hard shells and become more vulnerable.

Zooplankton are tiny organisms that are often too small for the human eye to see. In the wild, they can often be seen in larger groups, and are the main source of sustenance for young Bluegill.

In the video below, you can see how divers feed a large aquarium using a block of frozen plankton that thaws and disperses as the diver moves:

It is possible to buy blended and concentrated zooplankton in a bottle as a feed. It contains the right amount of fatty acids along with proteins, vitamins, and amino acids.

Fish pellets and dried worms are an excellent way to supplement your Bluegill’s diet. Although they prefer the above-mentioned options, by cutting back on these and topping up with pellets, you can make your feed last longer and know that the fish are getting all the nutrients they require.

There are a number of great options for you to feed your Bluegill in an aquarium. Being carnivorous, they prefer small fish such as minnows, baitfish, and zooplankton. Depending on their size, you can introduce larger shiner fish and even freshwater shrimp.

Although you can feed fish pellets to your Bluegill and know that they will be eating a high protein diet, you may find that they do not eat as much, preferring to chase down the smaller fish and insects. It is better to incorporate both in their diet. Possibly add the occasional grasshopper as a treat.