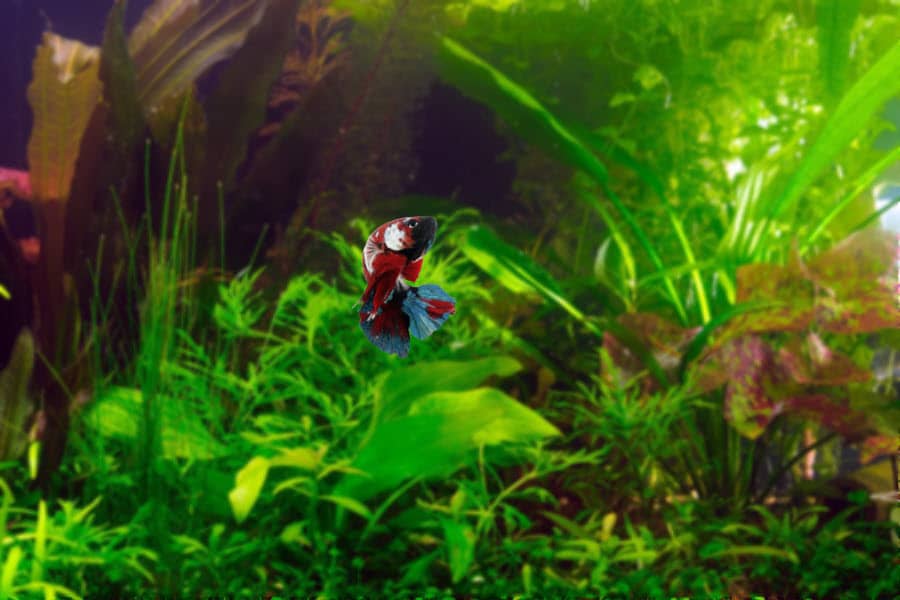 Are you worried about your fish swimming in circles? Aquarium fish cruising in a circular motion can be concerning for many reasons.

In the following article, we have shared various possible causes for fish swimming in circles and effective remedies to prevent your fish from behaving erratically.

Why Do Aquarium Fish Swim in Circles?

If you have optimal tank conditions and your fish is healthy, swimming in circles may signify mating behaviour or an act to protect their territory. Or your fish might just be playing around and having fun by moving erratically.

10 Reasons Why is My Fish Swimming in Circles

Fish mainly swims in a circular motion to express their feelings of discomfort. Once you find the cause behind that uneasiness, you can come up with different ways to remedy it.

Odd or erratic swimming behaviour is common in all fish. The list of causes for saltwater fish swimming in circles will be the same as for freshwater fish.

Ammonia poisoning in fish tanks results from rotting food particles and fish waste. Ammonia levels can spike suddenly if there is a significant change in the water chemistry or over a few days.

Do you know ammonia is often referred to as “an invisible killer” in aquariums?

Dangerously elevated ammonia levels impact fish gills causing them to gasp for air at the surface of the tank water.

Although it’s normal for a fish to occasionally come to the surface for air, fish stressed from ammonia poisoning will gasp in a vigorous or frantic manner.

Here are some clinical signs of ammonia toxicity in aquarium fish:

If you notice any of the above signs in your fish, test the tank water for ammonia and nitrites levels. If the test confirms the ammonia poisoning, as an immediate measure, do the following while you address the source of the problem:

One should aim to keep their aquarium ammonia level at 0 ppm. Ideally, nitrate levels should be less than 20 ppm to ensure a healthy fish tank environment.

Doing the above tasks will ensure immediate treatment and relief against ammonia poisoning. However, it’s crucial to address the underlying root cause to ensure it won’t happen again.

Getting rid of the causes is sensibly the most accurate way to keep ammonia toxicity at bay. To recap, here are some of the factors to consider

Whirling disease in fish is an infection caused by the parasite “Myxobolus cerebralis.” This ailment is commonly found in the salmonid fish, but it can also affect popular aquarium fish such as discus, corydoras, goldfish, and tetras.

The parasite enters the fish body and infects the inner ear and brain, causing neurological damage.

However, the susceptibility to contracting the infection depends on water temperature, age, and size of the salmonid host.

Young fish are most vulnerable.

Whirling disease has two hosts. The parasite can be present in the fish or freshwater oligochaete worms, best known as tubifex.

Be careful when you buy fish from breeders raising fish using tubifex worms as a cheap source of protein. Young fish are most vulnerable to getting infected with whirling disease.

Fish suffering from whirling disease tend to display “whirling” or erratic tail-chasing behaviour. It creates an odd corkscrew-like pattern. Besides, in an infected fish, you may also notice convulsive movements and rapid breathing.

Some changes in physical appearance include:

An infected fish will show the symptoms within 35 to 80 days after catching the disease. A sick fish may not die from the whirling disease, but it can primarily affect their ability to swim, eat, and escape predators.

NOTE: The mentioned symptoms may not always appear. And even if they occur, that is not a confirmation of the whirling disease. Perhaps, the only way to guarantee the ailment is through microscopic slides.

Unfortunately, there is no known cure for whirling disease in fish. It can be controlled in hatchery environments if given careful management.

Swim bladder disorder is a common illness in aquarium fish that disrupts the function of the swim bladder, a gas-filled organ responsible for the fish’s buoyancy.

There can be multiple factors contributing to this condition, including physical abnormalities, diseases, and mechanical or environmental factors.

Swim bladder problems are common in goldfish and bettas. Not to imply that other tropical fish can also suffer from the disorder.

Fish dealing with swim bladder issues mainly display the signs of buoyancy. Maintaining a normal body position while swimming is difficult for affected fish. They will swim on their side, upside down, or head down.

A fish with swim bladder disorder will either float at the water surface or lay at the bottom of the tank. In such conditions, fish get too sluggish to move around for food which affects their appetite and stresses the immune system.

You may also notice physical changes like a curved spine and bloated belly area.

As we know, the eating habits of a fish are the most common cause of swim bladder disorder. Make sure you aren’t overfeeding your fish, and consider feeding foods that are unlikely to cause constipation.

When fish are stressed, it negatively affects their behaviour, physical appearance, and health. Swimming in circles is one odd behaviour that they commonly display when exposed to acute stress.

It can weaken their immune systems increasing the risk of diseases and chronic infections leading to death.

Identifying the ‘stressors’ and eliminating them is the only way to help your fish calm down, be at ease and stop them from going around in circles.

Many factors can contribute to fish stress. Some of the most common stressors are as follows:

Overstocking of tanks is one of the primary reasons for stress in fish. In extreme conditions, it can lead to water pollution, oxygen depletion and even harassment.

It’s crucial to test aquarium water parameters every once in a while. Factors such as inappropriate pH levels, low oxygen levels, elevated ammonia and nitrate levels, and fluctuations in water temperature can cause acute stress in fish.

Last but not least, have periodic tank and equipment maintenance to ensure they are in optimal condition and functioning correctly.

Wrong pairing often leads to aggression in fish aquariums. When stocking a community aquarium, make sure the fish species are compatible to put together. Aggression is a real problem which can cause injuries, infections, and death.

One way to reduce harassment in aquariums is to provide enough hiding spaces. It essentially helps smaller fish to avoid getting bullied and stressed by aggressive tank mates.

Fish, likewise we humans, has a nutritional requirement for better health. Since many fish can live on minimal nutrition with stale flake foods, the importance of a proper diet is often overlooked.

Poor nutrition can cause major stress in fish, negatively impacting their immune system.

When you add medication to your aquarium for treating a disease or water condition, be aware that it can be stressful for fish.

If possible, avoid putting medication in the main aquarium and use a separate container or a quarantine tank to treat the illness or affected fish.

Fish swimming in circles isn’t always a cause of disease or stress; it might be a territorial behaviour, especially if your aquarium is in optimal condition and the fish seems healthy.

It’s simply an act of swimming in circles around a particular area to create a boundary and let other fish know they aren’t welcomed in their territory.

If you have shifted your fish to a new tank, they may swim in circles (almost erratically) to adjust to their new surroundings and get comfortable with new territory.

Environmental changes, such as adding new plants or decorations, may trigger a fish initially and cause stress.

There are many different signs of fish mating, among them, swimming in circles is one such behaviour that is usually displayed.

To ensure you don’t misunderstand a disease as mating behaviour, look out for other mating signs as well. These signs are distinctive and will depend entirely on the type of fish you have.

Fish are playful pets, and sometimes they love cruising around in circles chasing their tails. If you have never seen your fish moving around in such a way, this may concern you.

However, rest assured, if your fish is in good health, they just are having some fun.

What disease causes fish to swim in circles?

Whirling disease is the most common ailment that stresses a fish to go around in circles. It’s caused by a parasite that enters fish through their skin.

Fish swimming erratically in circles is a sign of dying?

It doesn’t necessarily mean that your fish is on the verge of dying. However, it could be a sign of a disease, infection or environmental stress that may lead to death if not controlled or treated in the early stages.

How long can a fish live with swim bladder disease?

Depending on what caused the swim bladder disorder in fish, it may be temporary or permanent. Some experts believe that swim bladder disease must be treated immediately, or it may result in dead fish.

However, there have been many cases of permanent swim bladder disease where fish lived long with some lifestyle modifications.

Can stress kill a fish?

The type of stress (what caused it) and its severity will be the determining factor. Fish’s immunity also plays a major role in this situation. A weak or sick fish can’t take much stress and will probably die if the stressor isn’t eliminated early.

How to stop fish from swimming in circular motion?

The reason your fish is going around in circles is due to the discomfort they are experiencing either due to disease, bacterial infection, poor water conditions or environmental stress.

Your job is to identify and remove the root cause so your fish can be at ease and swim normally.

With the information shared above, you should be able to figure out the cause for your fish swimming in circles and hopefully treat it using the effective measures we have discussed here.